You are here: Home » News » Anime/Manga News » Voice Cast announced for From Up on Poppy Hill

Voice Cast announced for From Up on Poppy Hill

GKIDS, a distributor of award-winning animation, has announced the English voice cast for From Up on Poppy Hill, a highly anticipated coming-of-age film. GKIDS has received three Best Animated Feature Oscar nominations in the past three years, and is a longtime producer of the New York International Children’s Film Festival. This uniquely inspired film is the new feature from Studio Ghibli, and it has been quite sometime since a Studio Ghibli film has come to the US without coming from Disney. The screenplay was written by renowned director Hayao Miyazaki and his son, Goro Miyazaki, directed the film. It was the number 1 grossing Japanese film of 2011 and was the winner of the 2012 Japan academy prize of animation. From Up on Poppy Hill will qualify for the Academy Awards in the Best Animated Feature category, with the theatrical release planned for March 15, 2013. 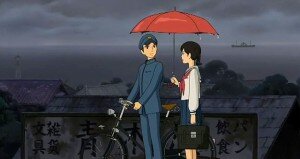 The story follows two high school students, Shun and Umi, as they try to save the school’s clubhouse from being demolished. An innocent love buds between the two in this coming-of-age story with beautifully hand drawn characters. From Up on Poppy Hill takes place in Japan where there is still some devastation from World War II as the country prepares to host the 1964 Olympics. The rich color palette and drawn detail marks another Studio Ghibli triumph.

The fact that Disney is not in charge of this film by no means affects the number of recognizable English names being utilized (See list below). All the talented voices working on this project are sure to assist in creating a sure to be original English dubbed version of From Up on Poppy Hill.

The cast list for From Up on Poppy Hill includes: