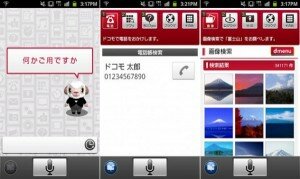 Talking to a machine on the phone has never been popular. But what if it felt more like you were having a conversation with some cute anime characters?

NTT Docomo in Japan has enhanced its popular app, Shabette Concier, or Talking Concier. The app is similar to the iPhone’s Siri app.

Beginning in November, users will have the option to change the voice and appearance of the app’s speaker. Users can choose from 15 different characters popular in anime and Japanese pop culture, including:

Talking Concier lets users speak in their natural voice to ask questions, get directions, check email, check train schedules and look up horoscopes. The new feature will incorporate an image of the character the user chooses when questions are asked and answered.
NTT Docomo also announced its plans for dGame, a social game service. Titles include Namco Bandai Games‘ Eiyu Spirits, Kamen Rider Legends and Tales of Kizuna as well as games by  Square Enix, including Sengoku IXA, KLab’s Captain Tsubasa ~Tsukuro Dream Team~, D2C’s Evangelion ~Zettai Boeisen~ for dGame, and Voltage’s Oji-sama no Propose.
The dGames will not be released internationally due to current inefficient market demands. But perhaps someday soon we’ll have some great apps with our favorite anime characters!
Insider-Games